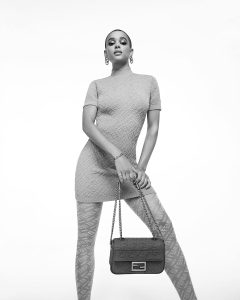 What are Fashion Collaborations and Why is Everyone Doing It Right Now?

Whether it is celebrity-based partnerships or the growing phenomenon of brand-to-brand bonds, collaborations have allowed industry figures to explore new aesthetics and bring together consumer bases. However, it is not easy to merge two house’s DNA and brand images. For this reason, not every brand collaboration is a successful match — especially in an oversaturated industry.

During the recent Milan Fashion week, the extravagant ‘Fendace’, a result of the ‘swap’ — as they insisted on calling it — between Italian houses Fendi and Versace, surprised the crowds.

What was surprising was the combination of these two brands in particular. After partnering in 2018 with affordable streetwear brand Fila, Fendi was now teaming up with fellow luxury house Versace. Moving forward, we already see images of its next collaboration with influencer and mogul Kim Kardashian’s brand, Skims, leaked all over social media. These three examples of collaborations are motivated by very different objectives and produce distinct outcomes as well.

Collaborations between fashion brands generate huge buzz; by joining forces, brands in the luxury industry can reach new audiences, strengthen their public image, and create publicity. The urge to cope with the current consumer’s demands after the pandemic brought about some interesting results: the number of fashion collabs has increased and many brands took advantage of combined skills to work on fresh and authentic projects.

To Innovate while Enforcing Values and Heritage

A collaboration breaks the code and refreshes a brand’s public image so it is a challenge to remain true to their traditional heritage and values. The key is coherence: collabs must be viewed as “mutual contaminations” that are part of both brands’ persevering growth. Collabs are ways to shape the future of the brands, to make slight changes, ensuring they never go out of fashion.

The capsule collection too boost demand

A fashion collaboration usually consists of a line of creations called the “capsule collection”. It represents a marketing technique that gives an additional allure of uniqueness and exclusivity and ensures selling out in a matter of minutes. High-street brand H&M is famous for its capsule collaborations with the most relevant luxury brands, such as Moschino, Versace, and Balmain. During 2021, The North Face x Gucci, Levi’s x Miu Miu, Supreme x Louis Vuitton, were unforgettable, in addition with some unusual and incredibly original ones: Studio Ghibli x Loewe and Hermès x Apple.
In a few words: the key to success lies in the rarity, the “limited edition” concept: few pieces distributed in concept stores that have been set up for the occasion are incredibly desirable.

The Power of Publicity

The last factor that increases the power of a collaboration is the strategic use of publicity: brands place an enormous part of their marketing budget on creative collaborations. Several weeks before the launch of the capsule in stores, brands increase advertisements on social media. Timing is essential: if unsold, in two days the capsule loses its magic and drops at the same level of attractiveness as any regular collection.

The Different Effects of Collaborations

One of a fashion brand’s goal is to reach the “aspirational audiences”, those consumers who cannot afford to buy luxury products but aspire to buy and to wear them, typically Gen Z and Millennials. They occasionally insert some luxury pieces in casual attire, and they do not hesitate to show off big logos. A collaboration between luxury and fast fashion brands is the release of affordable designs but with a visible luxury signature.
Like Fendi which teamed up with Fila, there is a fast spreading of luxury houses partnering with Highstreet, more affordable brands. Their collaboration almost had a feeling of evidence, with the two brands being famous for their respective “F”s. The joining of their logos resulted in a flashy “Fendi” accented with Fila’s notorious F,  stamping sweatshirts and t-shirts and giving a streetwear feel to the collection which succeeded in attracting much younger audiences.

These limited-edition collaborations allow a mutually beneficial relationship between catwalk designers and mass-market retailers or sportswear giants to both reach a wider audience and have a large influence on the current fashion climate.  There are also countless other examples of this phenomenon, including Louis Vuitton x NBA or Dior x Nike.

There are several reasons for collaborations of this type. First of all, they allow luxury brands to join the thrill of the non-seasonal ‘drops’ that have been popularised by streetwear labels. Moreover, they allow the joining of two contrasting worlds and therefore intend to attract  customer segments that usually wouldn’t intersect. By collaborating with a brand like Fila, Fendi aims to enjoy a positive association with a credible and popular ‘street’  brand. These collabs make catwalk fashion available to a wider audience and potentially make it more attractive and relevant to them as well.

Valentino’s Creative Director Pierpaolo Piccioli said that “it is important for brands to be open to new collaborations. It’s like an experiment.” Valentino itself collaborated in the past with brands like Levi’s, Birkenstock, high-end sportswear company Moncler and recently with Craig Green for a sneaker joint-creation which was called an ‘interpretation” rather than a collaboration. In general, these fashion universes colliding are called partnerships, artistic reunions or dialogues by their luxury actors, who insist on their creative and explorative motives, in order to (try to) avoid the cheapening effect that the collaboration could have on their brand image if seen merely as a business deal with a mass-market company.

Luxury x Luxury: Luxury Taking Back the Reins of Exclusivity

On the other hand, collaborations like the one between Fendi and Versace lead to drastically different effects. The joint creations of two luxury brands are more rare but they tend to have the most original outcomes. Unlike collaborations with more affordable brands, whose main aim is to reach new audiences, collaborations between two luxury brands lay their basis on a deep exploration of common styles and ideals in order to create new aesthetics.

In 2021, the Italian luxury fashion house Gucci celebrates 100 years since its founding and Creative Director Alessandro Michele reinterprets the House mythology from his point of view in a fashion film called Aria (an italian noun meaning “melody”), directed by Floria Sigismondi. Gucci’s aesthetic is completed with pieces designed by Demna Gvasalia of Balenciaga in an unconventional “hacking lab”. In a hybrid universe where Gucci’s Jackie 1961 and the iconic Flora print are decorated with the diagonal Balenciaga signature, Aria is an emblem of dynamic metamorphoses in Gucci’s heritage, a mix of two stylistic codes in a distinct aesthetic.

At the Milano Fashion Week show, in September 2021, the two Italian luxury brands Versace (Capri Holdings) and Fendi (LVMH) dropped a collaboration called “The Swap”: a switch between two creative minds. Donatella Versace designed a capsule with the double-F monogram, safety pins and baroque prints while Kim Jones, Fendi’s artistic director, designed a capsule using Versace’s Medusa inside a FF circle. The show demonstrated a surprising coherence between Versace and Fendi: the same Italian roots, a powerful nature and a Mediterranean inspiration contributed to enhance their identity in an innovative dialogue.

Brand collaborations allowa a boost of creativity in the fashion industry and enables brands to reach new audiences. Ultimately a collaboration is conceptually more similar to a “contamination” between aesthetics in order to preserve and enhance each brand’s style. What are we expecting today? This October, Batsheva announced a collaboration with Laura Ashley and Gucci x Ken Scott will celebrate their mutual love for floral prints and fabrics. Fendi announced officially this week its upcoming collab with Shapewear brand Skims and the collection between Italian brand Loro Piana and Japanese streetwear brand Hiroshi Fujiwara released in stores this month.