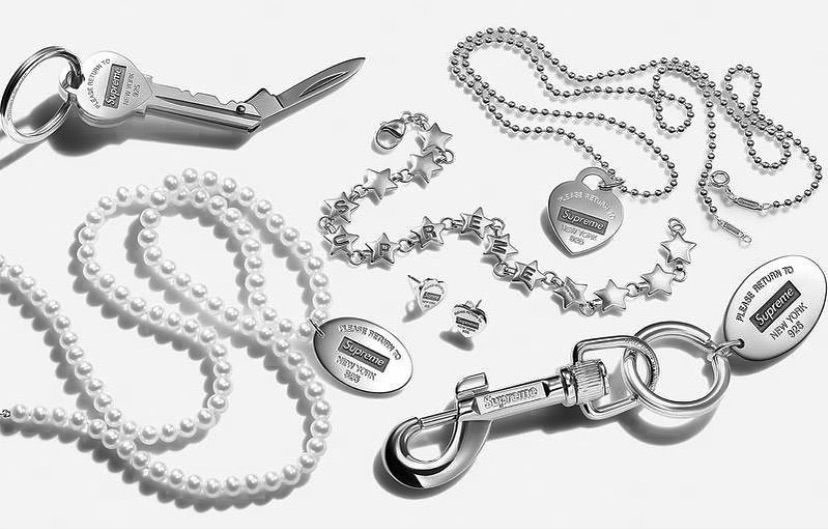 On the 11th of November, a collaboration, that no one would have ever expected, happened between Tiffany & Co and Supreme. Tiffany & Co is an American jewelry brand that was founded in 1837. It is especially known for its luxury goods, such as diamonds and sterling silver jewelry; therefore, its target market is high net-worth females of age range 28-54. Supreme on the other hand was born in April 1994 from James Jebbia and was presented to the market as a clothing brand for skaters. The history of the brand is closely linked to its first store, which is still located in Lafayette Street in Soho, the fashion district of New York. Hence, the target audience is almost opposite to that of Tiffany, mainly attracting male “skaters” between the age of 16 and 35 years old. To this end, the following ambiguous question arises: why did such two brands, with so different philosophies, decide to work together?

LVMH acquired Tiffany this year, and soon started rebranding the company. They changed their slogan to “Not your mother’s Tiffany”. This campaign was done to attract younger customers and change their perception of “old-world luxury”. According to LVMH research, by 2025, Millennials and Gen Z will account for 45% of global luxury sales. That is why more and more companies are aiming to connect with younger clientele. Indeed, this sudden need for rebranding arose from a decline in sales in the past two years. Oliver Chen Cowen, retail and luxury analyst at Cowen and Company, has said that: “If you don’t capture the Millennial customer, you put your business model at extreme risk for the future”. So, Tiffany is employing all its power to attract those younger customers. For example, they produced a digital campaign featuring actress Elle Fanning and rapper A$AP Ferg. In addition, Beyoncé and JAY-Z have become the new Tiffany’s ambassadors.

However, there is controversy over Tiffany’s rebranding. Their jewelry has always been iconic and rich with heritage, with the passing down over generations. Tiffany is known for the longevity of its products, so the aspect of the brand’s second-hand life is a mistake not to be underestimated. Some found that this new marketing strategy was offensive, especially to middle-aged women, who were their main clients for a long time. An entrepreneur, Rachel ten Brink, even called the slogan a «dissing» towards the brand’s most classic clientele. But even after this negative feedback about the rebranding process, Tiffany & Co continued to make some bold moves, with the latest one being, of course, the collaboration with Supreme.

In the 2000s, Supreme has steadily grown and has emerged from a niche for skaters to establishing itself as a lifestyle brand even if it still has a strong skate soul. Over the years, stores have been opened in Paris, London, Tokyo, Nagoya, Osaka, and multiple other cities, all with a design similar to the original store in New York. Supreme has diversified its products from the beginning, ranging from t-shirts, sweatshirts, and caps to novelty items like Baoding balls, hourglasses, and fire extinguishers. As a business model, Supreme immediately adopted a technique typical of high-fashion companies. One, that produces elitist and expensive garments to be positioned as a luxury brand, but then makes the highest margins and profits by selling accessories and relatively affordable products. Supreme’s strategy makes scarcity its fundamental rule. In fact, compared to any other brand that releases its collections all at once, Supreme only releases a dozen accessories or clothes during so-called “drops”. The purchase of Supreme by VF corporation (who also owns The North Face and Vans) last year will serve to accelerate the transformation of its digital, retail, and consumer-focused business model. The strategy will consist of increasing even more product rarity, leading to higher prices and increased demand. Despite this, trends perpetually vary, meaning Supreme will have to introduce new concepts to gain back its customers who lost interest since the brands’ peak, with this collaboration being a very good start.

In fact, on the 11th of November, the 2 brands finally released their collection of accessories, inspired by pieces originally launched in the 1960s. The iconic “Return to Tiffany” phrase reimagined on pendants, pearl necklaces and bracelets, and Supreme-esque key rings and t-shirts as “Please return to Supreme New York 925 “. As stated previously, there was a lot of controversy about this collaboration, however, all the pieces were sold out within moments on the Supreme website. Nevertheless, in order to retain the new consumer base Tiffany has definitely attracted, they’ll have to keep up the association with streetwear. Streetwear is cool and relevant to young, trendy consumers, but now Tiffany has to continue to pursue edgy partners to maintain respect with this target audience. Supreme, on the other hand, has gained high-end visibility that has largely diversified its audience and could represent the perfect opportunity for the brand to continue on a path of refined collections.